Thought I'd post an update, seeing as it's St. David's Day and I haven't posted here in a while.

Since we last spoke, the deliciously creepy UK cover for HARROW LAKE has been revealed... 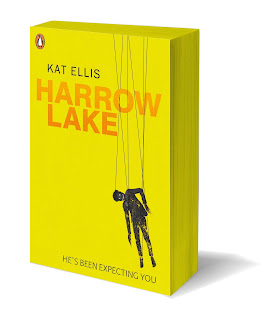 ...and the amazing VHS-style proofs have also been slithering out into the hands of readers:

Thanks to all who have posted early reviews so far (especially if you liked it!) You can add it to Goodreads here, or preorder it from pretty much anywhere that sells books (a selection of retailers and links are on the right-hand sidebar --->)

Thank you sooooo much if you've preordered it -- it makes a huge difference!

This week I will be travelling to FrightFest in Glasgow to talk about my book and all the horror movies which inspired the story, and I'm really excited about that -- it will be Harrow Lake's first real public airing, and to an audience who expect to be scared. My people, in other words.

In non-Harrow-Lake news, today I posted a thread of #TalesFromWales on Twitter if you'd like to check that out for some awesome YA and MG reads.


And as I'm waaay behind on the new book (but it is at least starting to take shape at last -- HURRAY!) I'll leave you now with a quick snapshot of how I'm starting March:

Reading: A proof of WILDE, the delightfully witchy new MG by Eloise Williams (out this May)

Singing along to: LET ME FALL by DeathbyRomy, and Hermitude's cover of Nirvana's HEART-SHAPED BOX (both absolute bangers)

Watching: the new season of OUTLANDER, and as many horror films as I can -- WITHIN on Netflix was a recent watch which I found genuinely scary!