Spring is here! FINALLY. Time to shuck the author fleeces in favour of author T-shirts that should probably have been binned several stains ago.

As if by magic (or the magic of being released from the SADs) I am now deep into my new writing project, which is a story about a magical, witchy island and the folks who have been banished there. Unusually for me, I'm setting parts of the story in real places in Wales, which means I'm sneaking out and poking around ruins etc. in the name of research, not just my usual morbid curiosity. The novel also has a historical (or alt-history, technically) strand to the narrative, and so I'm making good use of my local libraries to do proper bookish research, because lawd knows History was not my best subject at school. I dropped it at 14, so that probably tells you all you need to know.

But while I'm out gathering facts and ideas and making notes, I'm using this fabulous notebook which was a gift from Dawn Kurtagich (horror author extraordinaire). It feels like a Special Notebook, so I'm going to make sure I use it to write a Special Book.

Reading-wise, I slowed down a bit in April, but still managed to fit in 5 reads. These were they: 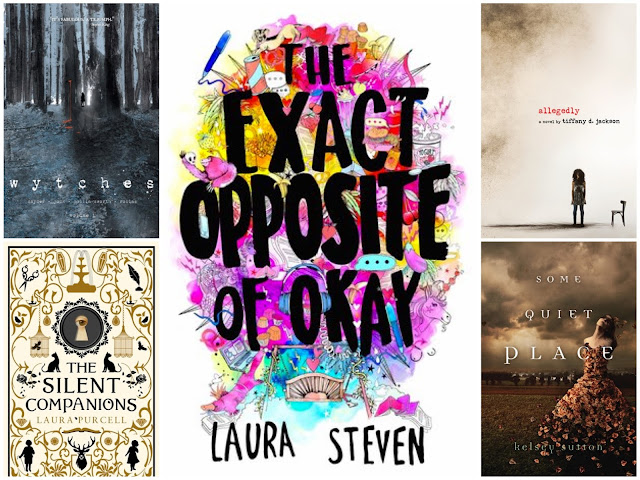 Let's start with the 3 YAs.

THE EXACT OPPOSITE OF OKAY by Laura Steven was a hilarious and brilliant feminist novel about Izzy O'Neill, a girl who is videoed having sex with a senator's son on a garden bench and becomes the focus of slut-shaming vitriol after it gets posted online and goes viral. Izzy herself is a delight -- funny, fierce, sex-positive, independent, and completely fallible, vulnerable, and human at the same time. I'm really looking forward to the sequel.

ALLEGEDLY by Tiffany D. Jackson is about 16-year-old Mary who is living in a group home after being released from 'baby jail', where she was sent for killing a baby (allegedly) when she herself was only 9 years old. But did Mary do it? I listened to the audiobook of this, read by Bahni Turpin, and it was twisted, gripping, and brilliantly performed. Jackson has a new book coming out soon called MONDAY'S NOT COMING, and I can't wait to get hold of that.

SOME QUIET PLACE by Kelsey Sutton (a recommendation and birthday gift from my critique partner & pal Jani Grey - thank you!) is a paranormal about a girl who can't feel emotions -- instead she sees them embodied all around her, particularly the enigmatic Fear, who is intent on solving the mystery around how Elizabeth ended up this way. This book is beautifully written, with that classic YA paranormal feel about it.

Per my reading goal for 2018, I also read an adult book and a graphic novel in April.

WYTCHES by Scott Snyder is about the Rooks family who move to a new town following a terrible trauma, but soon find themselves facing even more darkness as something evil lurks in the forest just beyond their property... The story in this was fantastic, with brilliant illustrations throughout that totally sucked me in. I'll be continuing this series for sure.

Finally, I listened to THE SILENT COMPANIONS by Laura Purcell on audio, which was a creepy, atmospheric treat. Newly widowed and pregnant, Elsie moves to the dilapidated estate of her late husband and finds herself facing local superstitions, fear, and a history of unexplained deaths on the property. Interspersed with Elsie's Victorian narrative are diary entries from one of the previous owners of the house, dating back to 1635. Tying the 2 together are the peculiar wooden figures -- the silent companions -- the first of which Elsie finds in a locked attic, and which looks a lot like Elsie herself...

And that wraps up my April reading! Aside from that and working on my new manuscript, I managed to go on a couple of adventures last month. It started with a trip to Penrhyn Castle...


...continued with a visit to a lake that lies beyond a secret door...

...and ended with a torch-lit walk through an abandoned bunker. The stuff of horror movies, I'm telling you.

I also had a baking first -- I made bread! -- and it was pretty decent. I post my baking adventures on Instragram (step-by-step in my Insta story) every weekend if you want to follow along.


I'll leave you with a snapshot of how I'm starting May:

Reading: (DON'T YOU) FORGET ABOUT ME by Kate Karyus Quinn

Singing along to: FERAL LOVE by Chelsea Wolfe and VENUS FLY by Grimes ft. Janelle Monae (both perfect accompaniment to my new WIP, in case you want to see what the vibe is...)