Despite what the snow would have you believe, we are now well and truly into spring, and the year is flying by. So with that note of existential dread at the inevitable plodding forward of time, here's what I got up to in March.

With St. David's Day falling on World Book Day (1st March), I naturally had to recommend some excellent Welsh books - these are they:

I also made some decent writing progress last month, in that I turned in 2 manuscript revisions (the first was the Blackfin novella which comes out this October; the other was a full-length novel I've been working on for over a yeeeeear).

Now I'm awaiting feedback/further edits for those, and as everyone tells you to distract yourself from waiting by working on The Next Thing, I've been dabbling with some new novel ideas. One is a manuscript I actually started a couple of years ago and set aside -- it's a magic realist YA set in Wales (I know, it surprised me too). Another is a fantasy that will require tons of research because there are historical elements to it, and a bit of rewriting of history. (That one might not end up going anywhere, but for now I'll let it tiptoe forward and see if it starts to run under its own steam. I'm not sure this analogy works, but feel free to edit it out by sharpie-ing a line across your computer screen if you hate it.) The last couple of story ideas are in the just-in-my-head stage of inception, so I'll leave them alone to congeal into something workable or fade away on their own. (Yeah, you can sharpie that too.) So I'm very much dabbling at the moment, and feeling quite unproductive. My house is pretty clean, though.

Reading-wise, I picked up steam in March, managing to read/listen to 8 books, and bringing my Goodreads goal back into the realms of possibility. This is what I read: 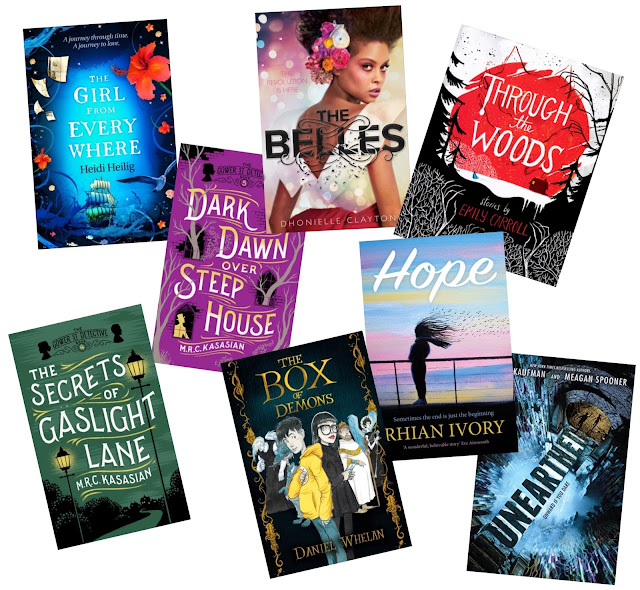 I'll start with the YAs. THE GIRL FROM EVERYWHERE by Heidi Heilig came out a couple of years ago and has been on my TBR pile ever since I saw its gorgeous cover and heard it was about time-travelling pirates. It was a quick, fun read, with gorgeous descriptions of Hawaii and the historical places Nix and her crew mates visit in search of the map that will lead them back to her mother.

THE BELLES by Dhonielle Clayton was one I listened to on audio (narrated brilliantly by Rosie Jones), and is about a girl called Camellia and her Belle sisters, who are born with the power to control beauty -- something everyone in the kingdom of Orleans craves above all. But there are dark secrets lurking beneath the beautiful facade, and Camellia quickly finds that being the queen's favourite Belle comes at a very steep price. This is the first in a series, and I'm really looking forward to the sequel.

HOPE by Rhian Ivory is such a wonderful book! I breezed through it, which is a tribute to the skilful way the author handles some heavy subjects, such as grief, dealing with having your future plans derailed, and PMDD. It's a brilliant portrayal of a smart, resilient girl learning to handle all that life throws at her, and coming to trust and depend on herself.

UNEARTHED by Amie Kaufman and Meagan Spooner is the first in a new sci-fi trilogy with strong romantic leanings (audiobook read by Steve West and Alex McKenna). This first book was like Tomb Raider in space, and I really enjoyed it -- which was no surprise, as I loved the authors' earlier sci-fi romance series (These Broken Stars, etc.)

BOX OF DEMONS by Daniel Whelan skirts the line between MG and YA, and is about 14-year-old Ben who has spent his entire life tied to a box with 3 havoc-wreaking demons inside. When an angel appears offering to rid Ben of his demons, he unwittingly sets out on a path that might just bring about the apocalypse. This story is set in North Wales where I live, and it was an absolute delight seeing the landmarks described with the trademark self-deprecating humour of a local.

Moving on to the Adult books... THE SECRETS OF GASLIGHT LANE and DARK DAWN OVER STEEP HOUSE by MRC Kasasian are the last 2 books in the Gower Street Detective series, and I'm positively forlorn that there are no more. (Also because of the way it ended, although I won't say any more about that.) I listened to the entire series on audio, read by Emma Gregory, and it was an absolute joy -- at times farcical, sometimes very dark, but always massively entertaining, and with little nods to Sherlock Holmes peppered throughout. If you like historical mysteries with humour, you should give this series a go.

Finally, as per my pledge for the year, I read another graphic novel this month -- the excellent THROUGH THE WOODS by Emily Carroll. A series of short horror stories, this is not only utterly engrossing, but stunning to look at. Easily one of my favourite graphic novels to date.

And that's all I read!

Aside from writing and reading stuff, I went on a few adventures. Some in the snow...

...one over a Victorian aqueduct...

...and a few in my kitchen (by which I mean I've started to experiment with recipes, I'm not leaping across my countertops in a cape.)

I'll leave you with a snapshot of how I'm starting April:

Audiobooking: THE EXACT OPPOSITE OF OKAY by Laura Steven

Singing along to: MAKE ME FEEL by Janelle Monae and WHITE FLAG by Bishop Briggs (both pretty fierce and empowering, tbh).