Welcome to the first wrap-up of 2018. January is now over, so congratulations to all who participated in Dry January (of which I was not one...) and here's to spring being just around the corner!

I read 4 books in January:

My first book of the year was Sarah Alderson's CONSPIRACY GIRL - a fast-paced thriller with a strong romantic aspect I was very much on board with. The book was also a birthday present from my wonderful friend Jani Grey, who obviously has excellent taste.

18-year-old Nic Preston survived the home invasion which ended with her mom and stepsister dying 2 years ago, but now it seems someone has their sights set on Nic again. Enter FBI-academy-dropout-turned-charming-hacker Finn Carter, and soon the bullets and sparks are flying everywhere. This was a really fun, quick read, with loads of action and intrigue.

Next up was THE CURIOUS TALE OF THE LADY CARABOO by Catherine Johnson, which has been on my TBR pile forever (I'm determined to make a dent in it this year) and was honestly my favourite read this month. It's a beautifully written historical novel about the affluent Worrell family and the mysterious young woman who comes to live at their stately home, purporting to be a princess from a distant land. The story shifts perspectives between Caraboo herself and the two Worrell siblings, one of whom is beset with a yearning to gad about Europe for a year or so like his friends rather than have to study/work, and the other who is determined to fall in love. Caraboo has much deeper secrets than the Worrells, and it's fascinating watching the characters become woven together before the threads all begin to come apart. It's a great book; I'll definitely be reading more by Catherine Johnson.

INDIGO DONUT by Patrice Lawrence is another book I've been looking forward to, since reading ORANGEBOY last year. This novel takes a step away from the more thriller-y aspect of ORANGEBOY, telling the story of Indigo - a girl raised in the English care system - and Bailey, a boy who wants to help Indigo reconnect with her family even though his own home life is looking a bit frayed. I really enjoyed this, and found Indigo and Bailey's relationship quite moving, tbh. I listened to the audio version, read by Ben Bailey Smith, who is an excellent narrator.

Last on my list this month, THAT INEVITABLE VICTORIAN THING by E. K. Johnson. I was so intrigued by the setting/premise of this story. Due to Queen Victoria changing the rule of succession to the British throne so that the eldest child - not the eldest son - inherits the crown, there have been knock-on effects across the globe: the British Empire is the greatest power on Earth; the Americas are seen as a wild and uncivilised place; and Victorian etiquette/manners have survived into the modern age, setting God and technology side by side. I thought this was quite a marvellous set up for what I felt sure would be an exciting and mind-bending story... but it turned out to be a quiet and uneventful romance that worked out very neatly for the three central characters (one of whom is next in line for the throne, btw. It doesn't really matter.) This one left me with tepid feelings, but that could be my fault for expecting something different.

So far I haven't met my goal of reading one adult book a month (though I DNF-ed one), so I'll try to read 2 in Feb. And a graphic novel - I have a few lined up that look pretty amazing.

Other than reading, I have of course been writing. I'm revising a manuscript at the moment, and it's dark and creepy and magic-realism-y (it took me a stupidly long time to work that out) and I'm both enjoying working on it and excited for it to be DONE. This book feels like it has been gestating for half a century at this point. Anyway, here's a pic I found that inspired the setting and backstory:

I also went on a ghost hunt with my sister, Alex. We visited Plas Teg in North Wales, which is an amazing old house with plenty of nooks for ghosts to hide in. If they were there, they hid a bit too well, though; although we had lots of fun looking for them, no ghosts appeared. Maybe my sceptic shield is too strong, who knows? In any case, it's great writing-fodder, and here are some pics/video clips from the night:


Went ghost hunting last night at Plas Teg with @alexlloyd75. The house is centuries old and stunning (if a little run down), and during the night the group used glass work, spirit boards, table tipping, and a range of ghost hunting equipment to try and communicate with any nearby spirits. There were some messages coming through on the board (none for me), and a bit of table tipping action, but I remain open-minded yet sceptical. It’s all good writing inspiration, in any case. #ghosthunt #ghosthunting #paranormal #paranormalactivity #iaintafraidofnoghost #katellisadventures #writinginspiration #amwriting
A post shared by Kat Ellis (@katelliswrites) on Jan 28, 2018 at 1:58am PST

I'll leave you with a snapshot of how I'm starting February:

Reading: THE GAME OF LOVE AND DEATH by Martha Brockenbrough

Singing along to: AND SAINTS by Sleigh Bells and LOS AGELESS by St. Vincent 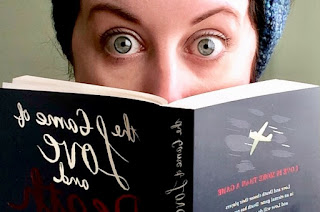