Yes, I am that far behind. August and September have been busy for me (deadlines etc.) so I had to put my wrap-up posts on the back burner for a bit. I also fell a little behind with my reading, which tends to happen whenever I make grand plans to read a lot.

As I'm wrapping up 2 WHOLE MONTHS of reading (I'll catch you up on everything else sooooooon because I have bookish newwwwws), I've split the 15 books up into categories: YA, Adult, and graphic novels (I know - a new thing for me!)

Let's start with YA, because it's the best. 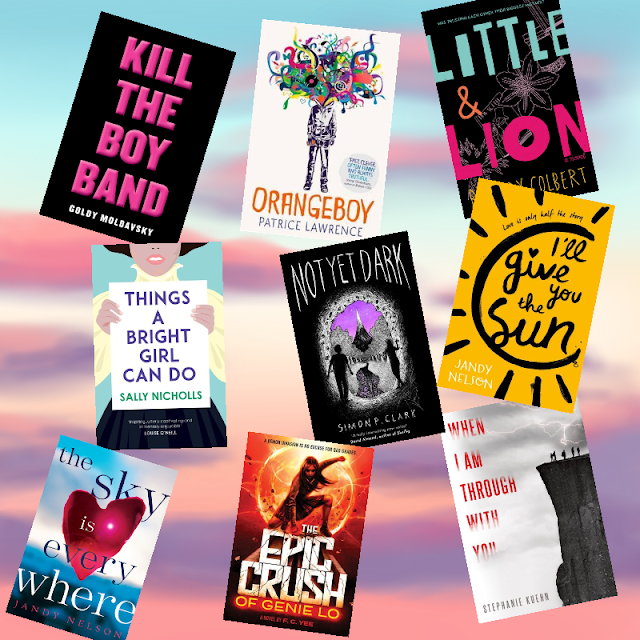 There are some real corkers in here!

THINGS A BRIGHT GIRL CAN DO by Sally Nicholls was a Netgalley read, and I really loved it. It follows three girls from different backgrounds who all get involved with the suffragette movement, and the story was in turns funny, gripping, and at times quite sad. Delving into political activism, family dynamics, sexuality, class, justice, and a whole raft of other important themes in a way that doesn't drag the book's tone down or make it feel like A Lesson, I think this is a very timely feminist book, and one I'd definitely recommend to any teen or YA reader. Or just anyone, really.

I'LL GIVE YOU THE SUN by Jandy Nelson has been sitting on my shelf for a couple of years, and despite the fact that everyone says how much they LOVE this book, I didn't really know what it was about. It's a dual POV story about twins Jude and Noah: Jude's narrative in the present, and Noah's 3 years ago, when the twins were still on speaking terms. When Jude meets a mysterious new boy, and is taken under the wing of a great artist, it unearths the secrets and lies that have built a wall between Jude and her brother. It was a delightful story, and very funny at times, so I can see what all the raving was about. Naturally, after finishing this one (on audio, btw - I recommend) I dove right into THE SKY IS EVERYWHERE. This one follows Lennie, grieving the sudden death of her beloved older sister, and trying to work out where she fits now that she's no longer a companion pony for her larger-than-life sister, Bailey. Again, it was funny and warm, though there's some sketchy behaviour on Lennie's part (I won't say what because I don't want to spoil it for anyone) that did put me off her a bit. I still enjoyed it heaps, though, and Lennie's grandmother was a scream.

I haven't read anything else by Brandy Colbert, so I had no expectations going into LITTLE & LION. It's about step-siblings Suzette/'Little' and Lionel/'Lion', who are reunited after Lion suffers mental health issues and Little is sent away to boarding school. Little is trying to figure out her sexuality and where she fits back in her old circle of friends, and Lion is struggling with bipolar meds and a new relationship. It was an emotional read (or listen, as I had it on audio), and I really liked the step-sibling dynamic.

WHEN I AM THROUGH WITH YOU by Stephanie Kuehn was on a summer thrillers list I wrote earlier in the summer (you should check it out - it's good), and follows Ben and his schoolmates on a camping trip which ends with Ben's girlfriend dying at his hands (that's not a spoiler - it's in the intro). Another intense read with an interesting premise and plenty of twists. I think this is my favourite of the 2 Kuehn books I've read so far (the other was Charm & Strange).

ORANGEBOY by Patrice Lawrence was a carry-over from my July reading list, and I really enjoyed it. Marlon is on a date with a girl he fancies when she has a bad reaction to some drugs they've both taken, and she dies. Things look pretty bad for Marlon, because he's been left holding her stash, and it only gets worse as he is pulled into the dangerous world of drug dealing and gangs - a world he wants no part of, especially as it almost killed his older brother. Marlon's voice was so distinctive and compelling, I got absolutely swept up in his troubles as it all keeps flying at him. I'm looking forward to picking up Lawrence's next book, Indigo Donut.

I fancied something funny and light after all that intensity, so I picked up the audiobook of KILL THE BOY BAND by Goldy Moldavsky. It was exactly what I needed - a fun, darkly funny, exciting story about a bunch of girls doing some mad shit. A teenage girl, who is a superfan of boy band The Ruperts, meets up with 3 other superfans at an exclusive gig, and they end up kidnapping one of the band members. It goes from bad to worse to even worse, and the whole story had me gripped and snort-laughing throughout.

Speaking of snort-laughing, if you're a fan of Buffy the Vampire Slayer, or just smart, kickass protagonists generally, you need to pick up THE EPIC CRUSH OF GENIE LO by F. C. Yee. It was brilliant - a demon-fighting heroine with a genuinely brilliant and hilarious voice, a very likeable and unusual love interest, and a quest to save the world. I will be snapping up the next instalment as soon as humanly possible.

I saved one of my faves for last - NOT YET DARK is the new YA novel from Simon P Clark, who is an awesome chap and a brilliant writer. His new book is a dark, eerie story about two lifelong best friends who are struggling to adjust to new friendship dynamics as they go through high school, and a mysterious society they discover trying to summon Death in an abandoned house. It's a fantastic read, and has that timeless quality to it that'll make it stick in your head for a long time. It comes out this week, so you can order your copy right... now. 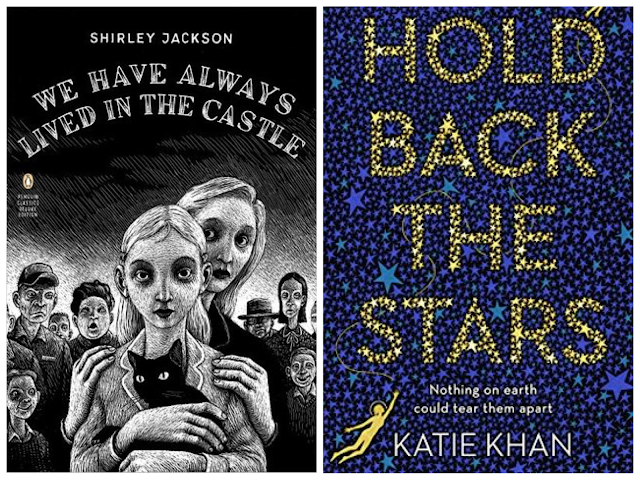 I'd heard of WE HAVE ALWAYS LIVED IN THE CASTLE by Shirley Jackson, of course, but actually had no idea what it was about. As such, it took me a little while to get into, but once the creepy voice had worked its way inside my brain, I loved it. It's about Merricat, who lives in her family home with her older sister, Constance, and elderly Uncle Julian. There were more Blackwoods just a few years ago - before someone slipped arsenic into the family's sugar bowl, and several of them died. This was darkly funny, and Merricat was a delightfully amoral protagonist who it was very easy to like.

My second adult read was HOLD BACK THE STARS by Katie Khan - a love story in space that's described as Gravity meets Sliding Doors (2 very apt comps, to be fair). It was a truly unusual and original story; I wasn't quite sure whether it was a romance or a sci-fi, or a sci-fi romance... category-wise, it didn't feel like it fit anywhere. That's not to say it wasn't enjoyable - it was very easy to get into, and did tug on the ol' heartstrings at a few points. It's going to be adapted into a film, I believe, so I'll be interested to see what they do with it in that format.

JOKER is set in the Batman world, and follows a criminal's spiralling descent as he becomes one of the notorious Joker's lackeys. It was ok, but nothing unexpected, really.

SEVERED was an interesting horror - probably my favourite of these 4 titles - about a young boy in the 1910s making his away along America's railroads in search of his father, when he meets a monster intent on recruiting him.

TURF was a very weird prohibition-era adventure, pitching gangsters against vampires against aliens... yeah, it was a strange cookie.

TALENT is about a man who miraculously survives a plane crash, and wakes to find he has been gifted the talents of the passengers who died so that he can get revenge against the person responsible for the crash. I love the artwork in this one, but the story didn't really grab me.

And that's it! I'm way behind my reading tracker, and need to catch up on my Netgalley list, so hopefully I'll have some more great books to share here in a few weeks. Not to mention that news I'm sitting on... ;-)