It's halfway through the year. Who ever thought we'd make it this far?? *Laughs weakly*

May was a good one in writing terms: it brought me to midway through my Literature Wales Writer's Bursary-funded 3 months, during which time I've finished one MS and written a decent chunk of another -- about 10k so far -- which is looking like it's going to be a quirky romantic suspense. We'll see how that pans out (my books tend to veer off into dark places). But I submitted my midterm report for the bursary, so now I have one more month to go, and I'm determined to make it as productive as humanly possible. I'd like to have at least half a first draft of this new MS by then. Hold me to it, folks.

I also went on a writing retreat last month to a farmhouse deep in the countryside around Welshpool with 3 fab writer ladies: Dawn Kurtagich, the wonderful horror author who organises these things, Tatum Flynn, who writes hilarious MG novels and creates amazing art, and Jenn Faughnan, who writes fantasy and is a digital marketing whizz. And Auri the dog, of course.


Many words were written on the retreat, but we did also squeeze in a trip to the magnificent Powys Castle. Dawn got the staff to tell us ghost stories connected to the place, and they even showed us a secret staircase.


But what did I read last month? Take a look. 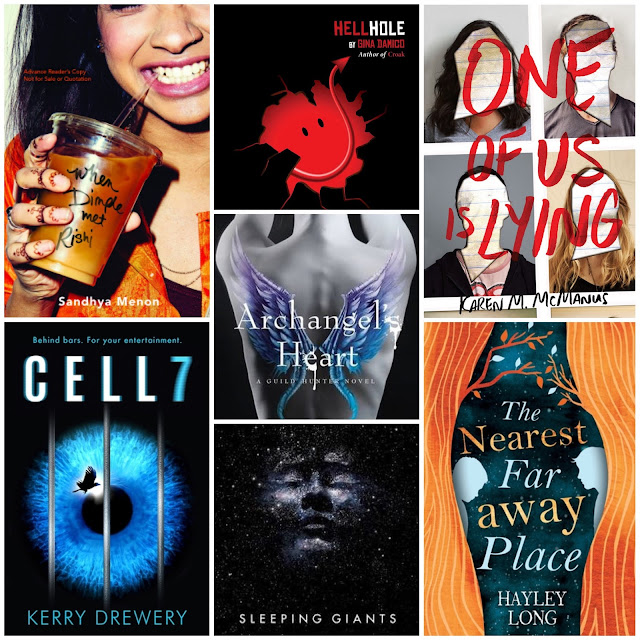 I'll begin with the 2 books I got via the good fellows at NetGalley. First up, ONE OF US IS LYING by Karen McManus begins with 5 seemingly unconnected teens going into detention - but only 4 of them will leave the room alive. Which one of them is a killer? This is such a great YA thriller - a dark mystery with interesting characters who play on common high school tropes and become more and more intriguing as the plot unfolds. There were plenty of twists along the way, and a fast-paced, taut finale that was totally satisfying. I'll definitely be keeping an eye out for McManus's next book.

Next was WHEN DIMPLE MET RISHI by Sandhya Menon, which I've heard lots of reviewers raving about online, so was really looking forward to reading. It's a cute romance, with 2 differently geeky protagonists in a coder summer camp setting. There was a lot to like about it - the arranged marriage set up; Dimple, who is more interested in coding than having a boyfriend; Rishi, with his hidden artistic talents, and their really lovely family dynamics on both sides. And I have to also mention the cover, which is absolutely gorgeous - easily one of my favourites of 2017 so far. I'm not sure quite why it's pitched as a rom com - it was definitely a romance for me - but it's one to pick up if you're looking for a fun summer read.

Thanks to NetGalley for those! Also thanks to Hotkey Books, who sent me an early copy of Hayley Long's latest book - THE NEAREST FARAWAY PLACE. I've read a couple of Hayley's older books, and I love her writing - and this new book just blew me away. It tells the story of 2 brothers - Dylan and Griff - dealing with the aftermath of a terrible tragedy, each having to carve a new path, and reflecting on the many roads travelled across the world on their way to Aberystwyth in Wales, and their new home & family. I absolutely adored it, and even did a little cry at a couple of parts. Definite thumbs up.

The next 2 YAs were both audiobooks I listened to while out on my walking adventures. HELLHOLE by Gina Damico (read by Macleod Andrews) is a horror comedy about a boy who accidentally summons a devil, then decides he might as well make a deal to try to save his sick mother's life -- ignoring the fact that devilish agreements generally come with a sting in the tail. It was a really fun story, excellently read by Mr Andrews (I'm an audiofan of his), and I'm very much looking forward to reading Damico's next book, WASTE OF SPACE, which comes out in July.

CELL 7 by Kerry Drewery (read by Rosie Jones) is a brilliant dystopian thriller about a girl on death row for killing a beloved celebrity, awaiting the public vote which will decide whether she lives or dies. Having waited awhile to get stuck into CELL 7, I'm now very glad I only have to wait a couple of weeks to grab the sequel. It was an absolute belter! It has flavours of Noughts & Crosses and The Hunger Games, a brilliantly real central cast, and a gripping story. I listened to the audio version, and highly recommend it - especially if you're looking for great UKYA audiobooks.

In keeping with my promise to read at least one adult book per month, I actually caught up with that target by reading 2 in May. The first was an audiobook -- SLEEPING GIANTS by Sylvain Neuvel (read by Andy Secombe, Eric Meyers, and Laurel Lefkow) which was a really compelling sci-fi about a group of scientists trying to figure out the origin and purpose of an enormous metal figure found buried in locations scattered across the globe.

Last of this month's reads was ARCHANGEL'S HEART by Nalini Singh. This is the latest in my favourite series by my favourite author, and continues Elena and Raphael's story as the archangelic Cadre face a new threat in the wake of rogue archangel Lijuan's disappearance. Honestly, I love this series with a fierceness, and I'm so glad Singh writes as quickly as she does, so I only have to wait a few months for the next instalment.

I'll wrap up with a couple of my favourite adventure pics taken in May.


You probably wouldn't guess how I had to parkour my way through dense woods to get this shot.


Some Normans I found hanging out near Rhuddlan Castle.

Now I'll leave you with a couple of tunes I've been listening to as I write. They're good writing fuel, I tell you.