April was pretty good in writing terms; I finished a new draft of my latest WIP and am waiting for feedback on that (and definitely not having anxiety dreams about said feedback... not at all). While I wait, I'm working on another new WIP that's been simmering away in my brainspace awhile. This one leans more towards magical realism, and is set where I grew up, so it's fun working on that.

It also wasn't too shabby a month for reading (though I'm still one book behind on my Goodreads challenge, grrrr.) I read 8 books this month, including one adult book. These were they: 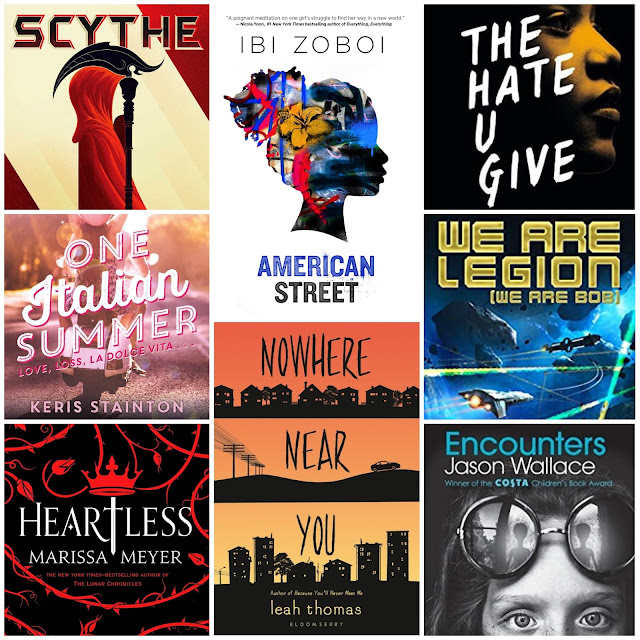 I'll begin with the 4 provided for review by the good people at Netgalley. First up: ONE ITALIAN SUMMER by Keris Stainton, which is out in May. This was my first time reading one of Keris's books, and it was an absolute joy. It's about three sisters going on an annual family holiday to Italy -- except this will be the first time since their dad died, and the sisters and their mother are all dealing with their grief in different ways. Add to that a sweet, believable romance, the gorgeous setting, and plenty of funny bits, and you have pretty much the perfect summer read. I will absolutely be getting my hands on more of Keris's books.

Next from Netgalley is NOWHERE NEAR YOU by Leah Thomas (published in Feb). I loved BECAUSE YOU'LL NEVER MEET ME (the first in the duology), so naturally I jumped at the chance to read the follow-up. And there were a lot of the elements I liked from the first book in NOWHERE NEAR YOU - namely the distinct and captivating writing, and the wonderful and charming Ollie and Moritz, with their unlikely yet uplifting friendship. There were also a lot of new and interesting characters introduced, both on Ollie's adventure to seek out other Blunderkids, and at Moritz's new school, and I really enjoyed getting to know them as well. That said, I went into this having enjoyed the meandering style of storytelling in BYNM, but expecting the pace and action to pick up in this book... and I didn't get that. I found myself wanting MORE. More plot, more urgency, more of the action this seems to have been building toward (maybe that is coming in Book 3 - is there one? I haven't been able to find confirmation). As it was, NNY didn't quite deliver for me.

Book 3 was HEARTLESS by Marissa Meyer, which came out a few weeks ago in the UK. Again, this was my first book by this author, although I've heard rave reviews about this and her other series, The Lunar Chronicles. This book tells the origins of the Queen of Hearts from Lewis Carroll's Alice in Wonderland, following Lady Cath Pinkerton as she goes about trying to extricate herself from a courtship with the king so she can set up her own bakery, all while avoiding random attacks by the terrifying Jabberwock, and falling for the mysterious new court jester, Jest. Except Cath doesn't really try all that hard to extricate herself from the courtship. Or get her business underway. GAH. I loved the world -- of course! -- and the set-up of the origin story, but I found Cath frustrating for most of the book. A lot of the conflict would have been avoided if she had just spoken up at any point, and she only seemed to grow a spine during the last few pages. I really wanted to love this book, and there were parts that I did... but Cath kept getting in the way. Damn you, Cath.

Last on my Netgalley review list is a book I also won in a Goodreads giveaway (yay!) and it was quite a strange little egg. ENCOUNTERS by Jason Wallace is out this month, and tells the story of 6 young people who have all been affected by a UFO sighting near a school in Zimbabwe in the 1990s. I went in expecting this to be a kooky alien book, but it went much deeper than that, instead opening windows into the complicated, often dark, lives of these kids. It was unsettling, and a little hard to get into at first (it opens with a narrative of a boy who is very unlikeable in his sexist, racist, homophobic views -- although this isn't representative of the book as a whole) but it's definitely a novel that makes you consider the assumptions we make about shared experiences and trustworthy narratives. An interesting one, for sure.

Next up is a book I have been looking forward to for months: THE HATE U GIVE by Angie Thomas. THUG (the title comes from the acronym THUGLIFE, a Tupac quote) was inspired by the Black Lives Matter movement, and tells the story of Starr, a black teenager who witnesses her friend being shot by the police, and the fallout as experienced in her mostly black, working class neighbourhood, and the mostly white, elite school she attends. It is in turns heartbreaking, hilarious, and hopeful -- a phenomenal novel everyone should read. I was also lucky enough to meet the author during her UK tour, and hearing her speak about her inspiration for the book was incredible. I can't wait for her next book, and the movie of THUG which is currently in production.

I'm not entirely sure what to make of AMERICAN STREET by Ibi Zoboi, even a few weeks after finishing it. The book description says it's about Haitian teen Fabiola, who comes to the US with her mother -- except her mother is detained at customs, so Fabiola's journey continues with her aunt and cousins in Detroit. Beautifully written, and with characters who seem totally real, I was definitely absorbed by the story... I just wasn't sure quite what I was supposed to take from it, and there didn't seem to be much focus/resolution to some parts of the story.

As I've mentioned in previous posts, I'm a huge fan of Neal Shusterman, and his UNWIND series was one that inspired me to become a writer myself. So I was really excited to listen to the audiobook of SCYTHE, his latest YA series-opener, and I absolutely loved it. Citra and Rowan are Scythes-in-training -- those who will glean the lives of select individuals so that population numbers in this post-mortal society can be kept in check. It was dark and gruesome and totally riveting -- I can't wait for the next in the series, which comes out later this year.

Last on my list this month was a funny adult sci-fi: WE ARE LEGION (WE ARE BOB) by Dennis E Taylor, which is about a modern-day IT company owner who is cryogenically frozen, and awakens a century later as an AI in a very different world. I listened to the audio of this one, too, which I think made it even more enjoyable. It was irreverent and unusual, and although I got a little muddled at times with all the different Bobs, it was overall a fun, easy listen.

That's it for my April reads -- PHEW.

What else did I get up to? Well, I visited Chester Cathedral with my sister, and caught this couple kissing in the shade of a magnolia tree in the inner courtyard...


I also spent a day working at Gladstone's Library in Hawarden with this little gem -- horror author Dawn Kurtagich.

Check out @dawnkurtagich being an industrious author person while I bother her with my phone. #author #authorlife
A post shared by Kat Ellis (@katelliswrites) on Apr 11, 2017 at 3:15am PDT


I went on some walking adventures, as the weather was at times rather clement.

Spring walk past the castle. (I mean Spring as in the season, not my flamboyant walking style.) #castle #spring #walking
A post shared by Kat Ellis (@katelliswrites) on Apr 19, 2017 at 3:55am PDT


...And I caught 2 hedgehogs growling and fighting in my back garden, as you do.

Aside from that, it was writing, writing, and a bit more writing. While all this was going on, I also binged this track from Highly Suspect.

And that was about it for April. May is set to be a good month, with a writing retreat in mid-Wales, lots more writing, and hopefully lots more sunshine.