Last weekend I scraped myself out of my onesie to go on a ghost hunting adventure with my sister, Alex. As we walked up the road to the castle, it was lit only by the moon. Proper spooky, like. 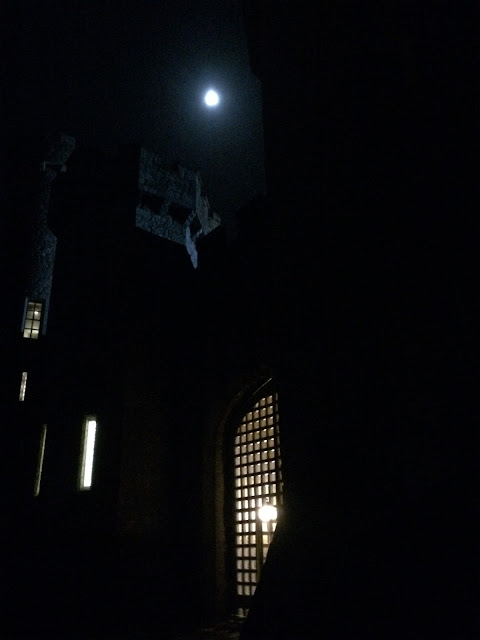 This is Alex, for reference. The prompt for this photo was "Look ghostly". 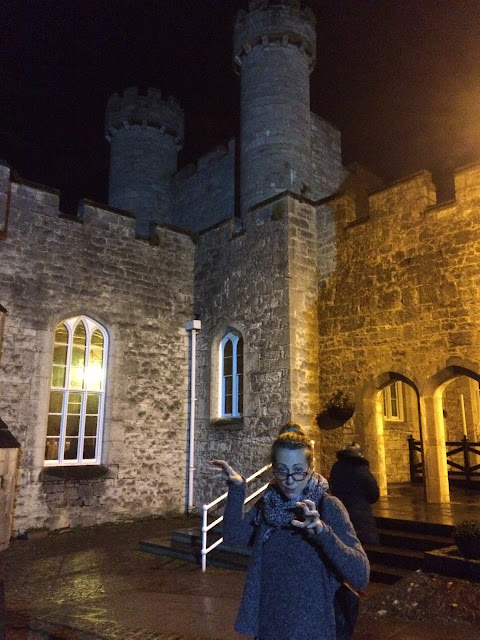 It was better than my "Look ghostly" pose, to be fair. 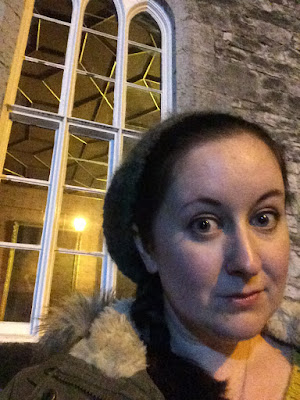 Anyway. Inside the castle we assembled (there were about 30 of us in all) for a guided tour of the rooms where we would later hold vigils and use ghost hunting equipment to try and rustle up some spooks. During a talk about the history of the place, we reached a part about 2 young girls who fell through the ice while skating on the pond in the 1920s, and one man in the group suddenly collapsed in quite dramatic fashion (I feel it's okay to say this now as I checked and he was absolutely fine afterwards). An auspicious start, as I'm sure you'll agree.

We then broke into smaller groups and took up stations in different rooms in the castle. Our group started in the dining room, where the walls are decorated with portraits of historical politicians (I'm not sure why) as well as an imposing but lovely portrait of Lady Amelia, who once visited the castle and is reported to have been sighted there in ghostly form. (We didn't see her.) There was also a beautiful grand piano and a dining table laid out as though the castle's former residents might be about to sit down to Christmas dinner.

Once we were in situ, all the lights went out, and the guide, Lucy, called out for spirits to come and talk to us. [I should probably point out here that I'm a Scully as far as paranormal phenomena is concerned - highly sceptical, but willing to admit to being wrong if I'm ever presented with actual, measurable evidence.] It was initially very 'quiet', as I expected, with only a quivering curtain (I think it was just moving because of the heat rising from the radiator) until we all heard the sound of footsteps running quickly down the stairs. And as I mentioned, all the lights were off at this point, and none of the other groups were stationed near the stairs, so that, I will admit, got me to raise an eyebrow. Anyone running down those stairs in the dark -- even if they knew the house really, really well -- would break their neck. So, I'll count that as one spooky encounter.

After that, 4 or 5 members of the group used a glass to try and communicate with a spirit. I watched them for a while as they somehow identified the spirit as Thomas Humphrey (Humphrey was the surname of one of the families who had owned the castle) who said he would appear to us near the aforementioned piano. So off I went to record.


No Thomas, unfortunately, but you can just about make out the portrait of Lady Amelia and the piano, and hear the screech of the glass whizzing around the table in the background. Creepy, no?

Later we visited the schoolroom up in the eaves (no sightings there) and the cellar where the guides told us a ghost known as The Cellar Man often appears. Then up into the toy room where the 2 drowned girls are said to frequent, and as well as using the glass again to try and communicate, we did something called a 'human pendulum'. This involved standing in a circle with our hands linked, while one member of the group stood in the middle and allowed herself to be pushed forward or backward by the spirits. To be honest, this was the part I had the most narrow-eyed reaction to, as the person at the centre seemed extremely keen to hear from the departed. Very keen.

To finish off the night (it was closing in on 3am by this point) a couple of members of the group used a spirit board to contact a spirit, and received a message that one of them was going to die slowly, concluding with the ominous message "RUN".

The night was great fun and very atmospheric, but again I can't say it really swayed me from the path of scepticism. It was great inspiration for writing spooky stories, though, and most of all it was nice to hang out with my sister. 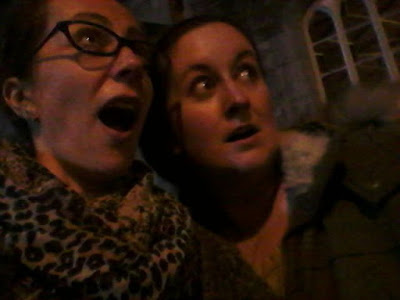 Happy almost-Christmas. (But seriously, how is it nearly Christmas???)

I generally like November, what with it being the month of my birth and all, but this year there were a few *cough* other factors spreading a thick coating of awfulness over everything, so it was not exactly the best November ever. You know what I'm talking about.

BUT there were some good things to take away from last month; for my birthday, I went to the Roman city of Chester to do some shopping with my mother (she is lovely -- everyone agrees) and had extremely good tapas for lunch. I love Chester, especially at this time of year, because it looks like you've stepped through a mirror into some alternate reality where the most photogenic periods of UK history have all been mashed together. Look:


I also had a small adventure to St. Winefride's Well, which is a 16th Century shrine built on the site where Winefride was attacked and beheaded by Caradog in the 7th Century. According to the legend, Winefride came back to life after her uncle, St. Beuno, prayed for his niece, and a spring erupted from the ground and restored her. Pretty nifty if you ask me.


Adventuring aside, you're probably expecting me to announce that I have finally finished the draft of this manuscript, right? Like I promised? Because I blogged about it, so am accountable...? Yeah, you remember. And no, I haven't finished. But I am CLOSE, and I got fantastic feedback from a new CP which has reinvigorated me to get this mofo finished and out of the door. Soon, I swear. Very soon. (Please imagine a shifty-eyes gif has been inserted here. It saves me having to Google one.)

One thing I did (which probably goes some way to explain why I'm not finished with this bloody manuscript) is read a steaming ton of books. 10 of 'em. These are they.

Most are contemporaries, as planned, but you might also notice a sci-fi and 2 horror-ish reads in there, which crept over from my October reading. So let's start with those.

HOLLOWLAND by Amanda Hocking was an audiobook bargain, and my first ever Hocking book. It's a zombie thriller set in a post-apocalyptic world where survivors of the outbreak huddle together under military protection, and Remy and her brother might hold the secret to stopping the zombie virus. It was an entertaining quest story with plenty of dark moments and action, and (my favourite part) a pet lion called Ripley.

BEWARE THE WILD by Natalie C Parker has been on my TBR for aaaaages, just waiting for the perfect moment to be read. This creepy and evocative southern gothic about a girl whose brother wanders into the swamp and is promptly forgotten by everyone who knew him is probably one of my favourite reads of the year. I'm now hankering after the sequel like a starving swamp monster.

ON THE EDGE OF GONE by Corinne Duyvis follows Denise -- a resourceful, smart, autistic teen facing near-certain death as a meteor is about to hit Earth. I loved Denise, and the story of how she navigates her apocalyptic circumstances to keep herself and her family alive kept me totally gripped.

Now on to the contemporaries...

That said, I'm not sure BECAUSE YOU'LL NEVER MEET ME by Leah Thomas is exactly contemporary, because it has some elements of fantasy/sci-fi to it (kind of? I'm honestly not sure which genre it slots into). Two boys in unique situations -- one was born without eyes and uses echolocation to 'see' the world in brilliant and fascinating detail, and the other is allergic to electricity and forced to live in a cabin in the wilderness) -- begin an unlikely but totally riveting friendship through letters, and each one reveals a little more about what really connects them. This was a brilliant book, and I now have an advance copy of the sequel to read before it releases next month -- I can't wait! I got both for review from Netgalley.

TO ALL THE BOYS I'VE LOVED BEFORE by Jenny Han is about Lara Jean and the unsent letters she wrote to exorcise her feelings for 5 unwitting boys... and the letters are, of course, unexpectedly mailed to their various recipients. I went into this month hoping for some cute, fluffy reads to lift my wintry spirits, and that's exactly what I got with this one.

FANGIRL was another audiobook bargain, and as I expected after reading some of Rainbow Rowell's other work, I really enjoyed it. First love, starting college, finding your place in the world, fandom, complicated family dynamics -- it's all expertly handled and just makes for a thoroughly good read.

I was lucky enough to get an early copy of Stephanie Kate Strohm's latest: IT'S NOT ME, IT'S YOU from my wonderful agent, Molly, and I loved it. Snappy and fun, with an unusual format and great characters, this is about a serial monogamist who finds herself being dumped for the first time. Backtracking through her previous boyfriends, Avery Dennis tries to figure out what has gone so terribly wrong in her love life that she is without a date for senior prom.

ALEX AS WELL by Alyssa Brugman was on my radar after appearing on awards shortlists when it came out, so I was looking forward to this story about an intersex trans girl struggling to deal with her parents' awful response to her 'coming out' as a girl and trying to fit in at a new school where her classmates don't know that Alex has ever presented as any gender other than female. It was an engaging story with great voice, but it did leave me with a few questions around how Alex's past 'self' (Alex when she presented as male?) was portrayed as an imaginary twin who ogles her in changing room mirrors. Seemed a little sketchy to me, maybe? Hmm.

HIGHLY ILLOGICAL BEHAVIOUR by John Corey Whaley follows three teens whose friendship is based on a lie: Sol, the agoraphobic gay boy who hasn't left his house in 3 years; Lisa, the overachiever who decides to befriend and 'fix' Sol so she can use the experience in her college application; and Clark, Lisa's boyfriend, who gets caught in a tangle of love and lies between Lisa and Sol. I found this funny and addictive and sometimes heartbreaking, and the audiobook narrators were awesome.

Finally, there was THE DISREPUTABLE HISTORY OF FRANKIE LANDAU-BANKS by e. lockhart. This was a smart, wry look at boys' club mentality and old money privilege in a private school, and Frankie's ambition to wrest control of the secret Basset Hound society from the boys who she feels aren't exploiting its full potential. Some call this a feminist book, and I'm not sure it's that for me, but I did enjoy it.

So that's what I read, taking me well past my goal of 75 reads for the year with a month to spare. No, I won't be reading that many in December.

Back to the writing cave I go...