July saw me turn in my final final final revisions for my 3rd book, PURGE, which will be out in September. This book is a really special one for me, so I'm ten times more nervous/excited for people to read it. Mason, the main character in the novel, is the first character who ever sprang to life in my head. PURGE (at least an earlier incarnation of it) was the first novel I ever finished, and it was also the one that helped me sign with my agent, the amazing Molly Ker Hawn. And it's the second book of mine to be published by the brilliant team at Firefly Press, who just won the prestigious Branford Boase award. Exciting, right??

If you've liked either of my other books, or just like sci-fi with a dose of romance, please, please do check it out. I'll just leave the links for Goodreads/online retailers right....here: 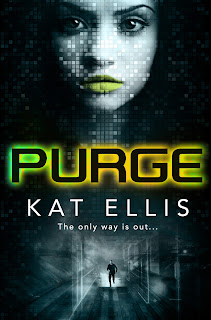 July was an exciting month in the YA book community, because Dawn Kurtagich's second novel - THE CREEPER MAN - came out in the UK (yay!), and because the UK's only YA lit-focused convention, YALC, was held down in London. I wasn't able to make it this year (boo!) but there were copies of BLACKFIN SKY and samplers of PURGE there in my stead, and I still decided to theme some of my July reading around the authors who were on the YALC programme.

Here's what I read: 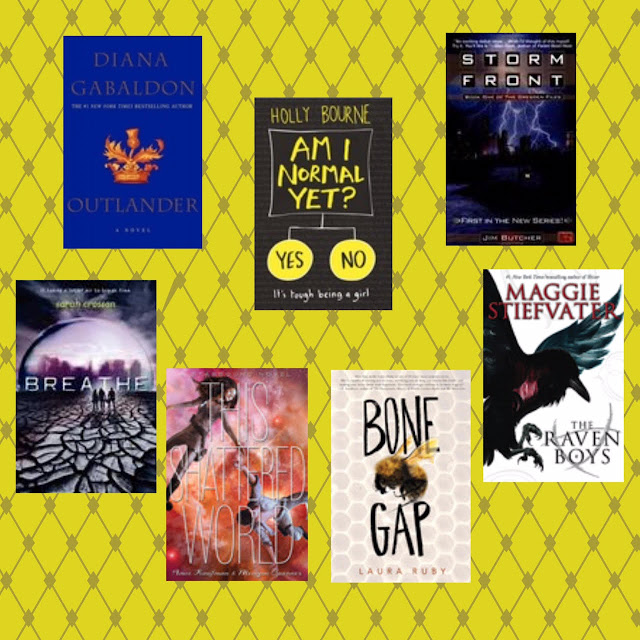 So, from the YALC line-up I read BREATHE by Sarah Crossan, which tied in with my never-ending sci-fi binge, and was a great dystopian adventure; THE RAVEN BOYS by Maggie Stiefvater which... well, I love reading stories that use Welsh mythology/history, but there were some problematic uses of it in this book that didn't sit right with me; and AM I NORMAL YET? by Holly Bourne, which was an absolute joy to read, and I'll be grabbing the next in the Spinster series very soon.

I read the very weird and wonderful BONE GAP by Laura Ruby, which has rightly won all kinds of accolades. I listened to 3 audiobooks while out on my walking adventures - these were OUTLANDER by Diana Gabaldon and STORM FRONT by Jim Butcher, which I'll admit I got because they were on sale, but I ended up really enjoying both; and THIS SHATTERED WORLD, which is the second in the trilogy by Aimee Kaufman and Meagan Spooner, and a great follow up to THESE BROKEN STARS.

Want to see my fave walking adventure pic from my Instagram? Sure you do.


I also went to see the new Ghostbusters movie, which was bloody wonderful - absolutely everything you'd want in a Ghostbusters movie - funny, plenty of action, and 4 great leads. I highly recommend it if you haven't already seen it. I'm looking forward to seeing the new Star Trek film soon, and Suicide Squad, which looks ace. I've become a bit obsessed with one of the songs from the soundtrack of the latter - check it out here, if you fancy:

So, that was my July! In August, I'll be focusing mainly on reading UKYA books, so I'll have a few more YALC authors in that line-up, too. Writing-wise, I'll be working on (hopefully finishing!) my new YA manuscript, and getting things ready for PURGE's launch.

Now back to the writing cave I shuffle...