In no particular order, these are my 10 favourite YA & MG reads for this year.


1. The Boy Who Drew the Future by Rhian Ivory

Why I loved it: So haunting, with great historical detail woven into the mystery. It sweeps you right along to a powerful ending where the two narratives intersect.


2. The Dead House by Dawn Kurtagich

Why I loved it: I've never read anything quite as disturbing or unique as this. The characters, the premise, even the format, are so skilfully disjointed that it keeps you guessing and second-guessing everything, right to the last page.

3. The D'Evil Diaries by Tatum Flynn

Why I loved it: Jinx is an absolutely adorable main character, especially for a demon, and the situations he gets into with Tommy on their adventure through Hell are hilarious.

Why I loved it: Duplicity has basically everything you'd want in a YA cyber thriller - great characters, intense plot, high stakes etc. But what really made this stand out was the humour and grit, and the main character was kind of a loveable asshole. It was basically my ideal book.

5. The Accident Season by Moïra Fowley-Doyle

Why I loved it: The voice really hooked me, along with a fairly bizarre plot and rather dreamy cast of characters.

6. Simon Vs The Homo Sapiens Agenda by Becky Albertalli

Why I loved it: The same reasons everyone else on the planet seems to love it - Simon Vs was funny, romantic, and it made my heart happy.

7. When My Heart Was Wicked by Tricia Stirling

Why I loved it: I would compare it to The Accident Season in a lot of ways - the dreamy tone, the lyrical writing and off-beat characters. It's one of those books you think about for a long time after reading.

Why I loved it: Truly, truly creepy, with an extra dollop of creepy on the side.

9. The One Thing by Marci Lyn Curtis

Why I loved it: This was such a great blend of contemporary and magical realism, with characters I fell in love with and a swoony romance.

10. Ready Player One by Ernest Cline

Why I loved it: This was such old school geeky goodness! I listened to it on audiobook, and Wil Wheaton's reading of it was just perfect.

ETA (because I'm an idiot and just realised I hadn't included one of my definite faves...)

11. The Lost and the Found by Cat Clarke

Why I loved it: Like all of Cat Clarke's books, it was heart-wrenching and gut-clenching and fist-bitey from start to finish, and with twists you'll never see coming.


What were your favourites this year?

I started 2015 with some great news: my second book deal! BREAKER was announced as my follow-up to BLACKFIN SKY, with Running Press buying world rights from my marvellous agent, Ms Molly Ker Hawn. There was much excitement, let me tell you. I also joined a great bunch of UK authors blogging over at Author Allsorts.

The first ever UKYA Extravaganza event was held in Birmingham, and I was one of the 35 or so YA authors who went along to talk to the readers, bloggers, and aspiring writers who snapped up the tickets. It was such a great success my book sold out in the first few minutes, and I was left signing bookmarks and posters to hand out! I got to meet lots of UK YA authors whose books I love, so I did my share of fangirling while I was there, too.

To celebrate World Book Day, I held a couple of international giveaways of BLACKFIN SKY. Apart from that, it was a month where I focused on writing the first draft of a new YA novel, and not much else.

Still drafting... still drafting... and I announced my THIRD book deal!!! Yes, that's right, books 2 & 3 will both be out in 2016. The third is called PURGE, and sold to Firefly Press (again, the work of Marvellous Molly).

I also went on my first ever writing retreat to Criccieth in North Wales. It was arranged by the dazzling Dawn Kurtagich, author of THE DEAD HOUSE (which I loved) and THE CREEPER MAN (which I cannot wait to read), and much fun was had. I intended to finish the major edits to that novel I mentioned above, and while I did some, I didn't finish it. In fact, there was just something not quite working with it... so I worked on another project for a little bit, ate ice cream on the beach (it was unseasonably warm in Criccieth) and got to know a great bunch of authors.

These 2 months were mostly taken up by edits for BREAKER, alternating with revisions for my manuscript-in-progress. Also some sunbathing, which took my skin one shade away from looking like an extra from The Walking Dead for the first time since I was a child. I'm calling that a win.

YALC! In London! Where I did an agent-author talk with Marvellous Molly! It was a fantastic weekend full of schmoozing, signing, and star-spotting at London Film & Comic Con.

I was lucky enough to be invited to do a panel event with Cat Clarke, who is absolutely lovely as well as being an amazing author. She was promoting her latest novel - THE LOST AND THE FOUND - and I talked about BLACKFIN SKY. It was great fun, and I loved exploring the festival and the city of Edinburgh for the first time.

More edits, more drafting, and the cover reveal for BREAKER! I am still in love with it, especially that creepy owl. And the feathery clouds. And the two figures walking across the school roof. FINE, the whole thing. 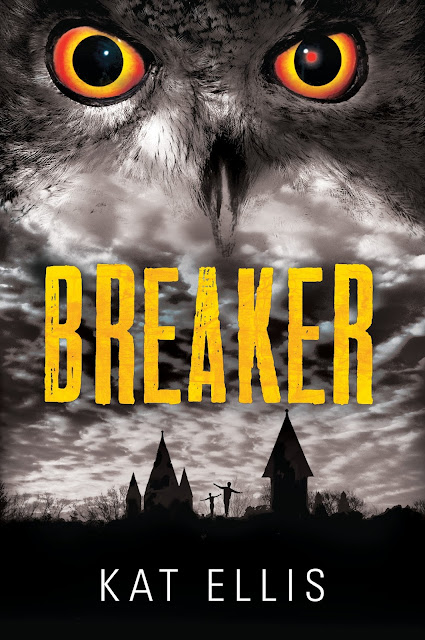 Still revising, editing, drafting, etc. I did some fun Halloween posts, wrote a short story called MOON SEASON for Simon P Clark's 1031 Story Challenge, got dressed up as a witch, and read a few horror novels. I also snuck out to see Nothing But Thieves playing in Manchester, and they were excellent.

I started getting into my exercise/audiobook regime more seriously this month, which saw an increase in my fitness level, and decrease in my writing productivity.

This month, I set up a pre-Christmas giveaway of BLACKFIN SKY over on Goodreads, and otherwise holed up in my writing cave to finish BREAKER edits and work on a few other projects. I emerged briefly to celebrate my birthday, then scampered back to the cave with cake around my mouth.

I started work on a new project, finished the final FINAL proofing for BREAKER, and generally got quite fat on turkey and sweets. Oh, and my husband gave me a brand new fleece poncho for Christmas. I think it makes me look like a friendlier version of Frank, the rabbit from Donnie Darko. What do you think? 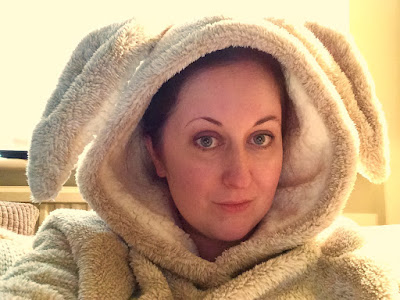