Heads up! US Giveaway of BLACKFIN SKY

Hello again! Just a quick heads up to my US pals: there's a giveaway happening right now, thanks to my US publisher Running Press Teen, where you can enter to win an early copy and some really cool,  secret extras! Closes soon, so HURRY.

This is the very last time an advance copy will be given away before the September release, so good luck!

Just wanted to let you know about a couple of promotions going on right now:

Blackfin Sky is only 99p right now on Amazon Kindle UK as part of their Summer Reads promotion. Get it quick, before the price goes back up...

Firefly Press are offering free UK delivery when you order Blackfin Sky direct from their website, so grab yourself a bargain!

...And whatever you're reading right now, enjoy!

What happened at YALC

Last weekend, I zoomed down to London for the UK's first ever YA literature con, YALC. It was being held as part of the larger London Film and Comic Con, and the crowds were HUGE and kinda spectacular - my buddy Freddie (above) was only one of scores of people there cosplaying.

I had a fantastic/hilarious/exhausting/fun/sweaty/amazing time there, and judging by the blog posts that have already gone up about it all over the interwebz, I'm not alone.

My author pal Dawn Kurtagich, whose novel THE DEAD HOUSE comes out next year (and sounds bloody amazing!) trawled the con with me for the weekend, and it was so exciting to hear people talking about her novel. It's going to be HUGE, people.

Penny Thomas from Firefly Press was also there, and it was lovely catching up and talking about exciting Blackfin Sky-type things with her. All the Blackfin Sky goodies that were being given out in the publishers' area flew out with a quickness, which was great to hear!


Dawn and I arrived early Saturday afternoon - just in time to catch the last part of the panel 'Going Graphic: from novel to graphic novel', which was interesting, although I unfortunately missed most of it (what with trains and zooming and such). I have to say that Sarah McIntyre (chairing, far right) looked AMAZING in her cosplay outfit, and was still looking immaculate in it that night at the author party at Earl's Court.


Later on, I caught the Heroes of Horror panel with Charlie Higson (who I still fangirl over from his days on The Fast Show - as well as his zombie novels, of course), Derek Landy, Darren Shan, Will Hill, and chaired by Rosie Fletcher. I loved this panel, although I've only read Charlie Higson's novels, but will definitely be picking up the others! They talked about the differences between YA and adult horror -- the graphic violence/gore aspect, the sex etc. -- and about how horror is a great gateway genre to go from YA to adult reading generally.


That was the last panel of the day, and after that we stuck around for the author party in a secret green-roomy type area of Earl's Court. I got to meet (read: awkwardly fangirl over) quite a few authors, including C J Skuse, Sally Green, Alexia Casale, and the wonderful Queen of Teen himself, James Dawson.

After the party, Dawn and I went to meet up with some author and blogger pals for drinks. I met the lovely Luna of Luna's Little Library, who was the first blogger ever to review Blackfin Sky - and she is just as lovely as I'd heard! I also got to catch up with all-round fabulistas Tatum Flynn (taking the photo) and Marieke Nijkamp, and a fab gang of folks I met for the first time after chatting with them on twitter.

Oh, and this happened.

The 'I'm too sexy for this book' panel, featuring Cat Clarke, Non Pratt, Beth Reekles, and James Dawson, was absolutely hilarious! Phrases like "alternative hole use" and "when you're writing, sometimes you just have to hammer it out..." kept the packed room in stitches, and I have to say this was my favourite panel of the entire con.


We managed to catch one more before our train took us back up to North Wales, and it was certainly one to watch! The 'Crossover: Not just for kids' panel got a little... er... contentious, but still very interesting.


I queued up afterwards to get a signed copy of Matt Haig's ECHO BOY, which I'm just dying to read, and snagged some more signed books and swag to take home. 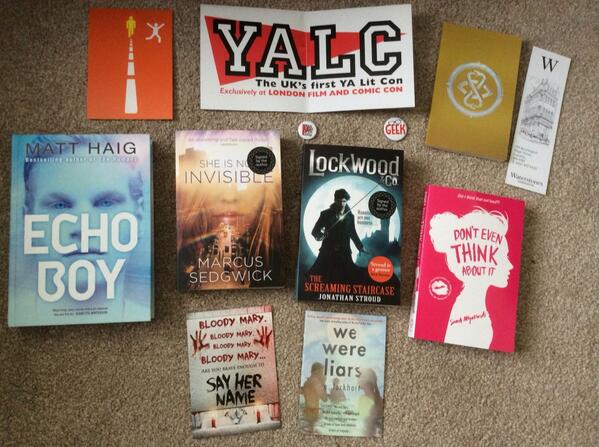 A few trains later, we were back home in North Wales, thoroughly exhausted. I had a brilliant time at YALC, and really hope there will be another YALC in 2015!

Til next time, London...

US giveaway of Blackfin Sky!

My US publisher, Running Press Teen, are holding the first ever US ARC giveaway of Blackfin Sky right now!

If you're in the US and would like to win an ARC of Blackfin Sky, plus - PLUS - a letter from me with some EXCLUSIVE extra content, then head on over to Goodreads by 10th July to enter.

In which I take over Firefly... or at least their site

Just a quick note to point you in the direction of my guest post today over on Firefly Press's website, in which I talk about the upcoming YALC (Young Adult Literary Convention) in London, where I will be heading in less than 2 weeks!

Hope to see you there.