That's right - WHERE YOU'LL FIND ME by the wonderful and crazy-talented Erin Fletcher is now out in the world! 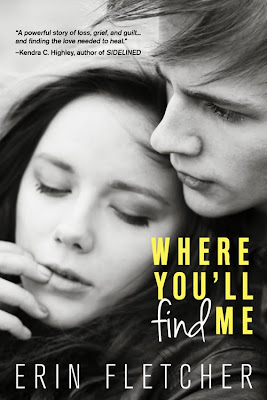 When Hanley Helton discovers a boy living in her garage, she knows she should kick him out. But Nate is too charming to be dangerous. He just needs a place to get away, which Hanley understands. Her own escape methods—vodka, black hair dye, and pretending the past didn't happen—are more traditional, but who is she to judge?
Nate doesn't tell her why he's in her garage, and she doesn't tell him what she's running from. Soon, Hanley¹s trading her late-night escapades for all-night conversations and stolen kisses. But when Nate's recognized as the missing teen from the news, Hanley isn't sure which is worse: that she's harboring a fugitive, or that she's in love with one.


And because I'm lucky enough to know Erin (ever since I saw her then-manuscript in a contest and twitter-stalked her into letting me read it waaay back in 2012), I asked her some questions...


1. Hanley discovers Nate hiding out in her garage one night when she sneezes and he says "Bless you." How would you react in that situation? How similar are you and Hanley?
My reaction would include screaming, running away, and/or calling 911. In other words, the exact opposite of Hanley's reaction! Hanley and I are not very similar at all, which made writing her character a lot of fun! However, I'm much more like Hanley's sister, Heather.
2. What's the thing you love most about Nate? Same question, but about Hanley?
The thing I love most about Nate is probably how perceptive he is. How he gets to know Hanley maybe even better than she knows herself. As for Hanley, I love her snark. It's another thing that made her character really fun to write.
3. Has the finished story changed much from what you first imagined it would be?
The ending changed a couple of different times. Nate and Hanley's secrets stayed the same, but the order of events and some of the final events themselves changed. I'm very pleased with how it turned out, and hope readers will be, too!
4. What's next on your writing list?
More contemporary YA! I recently wrote a novel about a figure skater who suffers from anxiety, and I have another contemp YA in the works!
5. Got any secrets about Hanley or Nate that NOBODY else knows? Could you maybe share one...?
Yes! No one else knows the reason Hanley is 16 years old, but doesn't have her driver's license. Truth is, she managed to scrape by in driver's ed and get her learner's permit. But while driving with her parents, she ran over a construction barrel. When she put the car in reverse, she hit a tree. She made it home after that, but was too close to the garage wall, and knocked the car's side mirror right off. It might be a while before she's allowed behind the wheel again...

Did I mention you can buy WHERE YOU'LL FIND ME right now?? You can!

Erin Fletcher is a morning person who does most of her writing before sunrise while drinking excessive quantities of coffee, believes flip-flops qualify as year-round footwear, and would spend every day at the beach if she could. She has a bachelor’s degree in mathematics (which is almost never useful when writing books) and lives in North Carolina.