Jani Grey is an awesome writer, a South African, and enthusiastic wearer of zebra blouses. She is also one of my CPs, and thinks so similarly to me that we call each other 'halfbrain'. Jani and I decided to swap blogs for Halloween - just to confuse y'all - but you should absolutely check out Jani's blog for more of her awesomeness, as well as her twitter. Without further faffing...


Kat suggested I write a post about my favourite movie monsters. This is a difficult one for me because I like monsters in general. All of them. It’s worth mentioning that I don’t watch scary movies for the plot. Give me a good fright, something that’ll make my heart race, and I’m sold. So I decided to focus on the ones that stood the best chance of scaring me, from movies and television, and why.

1. There is honestly no monster scarier than man. What scares me the most when it comes to human monsters is that they can be anybody. It can be the colleague sitting behind me as I type this. It can be my neighbour. The guy running my closest grocery store. It can be my sister. Do we really know what these people do when we don’t see them? And when they do whatever evil, horrendous, unspeakable things they are driven to do, they know exactly what’s happening most of the time. A character like Dexter is fictional, but when you look at the show itself, he did a damn fine job at living an apparently normal life. When people got suspicious, he took care of it without implicating himself to a certain extent. That takes some thinking power, and that’s damn scary. I’m not deluding myself on this subject. There are people like that out there, we just don’t know who or where they are. I’m binge watching Criminal Minds at the moment and the stuff I’m seeing is fear-inducing and fascinating at the same time. I’ll never be able to wrap my head around people being able to do things like that to other human beings, and I don’t think I want to. But it makes for fascinating writing, reading, and TV. What people are capable of is scary and seeing what you can only imagine come to life on screen... It’s frightening.

When I think of human movie monster I immediately think about The Strangers. The movie freaks me out for the same reasons as mentioned above. After I finished watching that movie for the first time, my very first thought was that it could totally happen. My grandparents were farmers and we visited a lot. How’s that for messing with your head when you’re home alone and all the lights are off? It’s wonderful, that’s what. I haven’t watched The Purge yet but just from the trailer I know it’ll bring the scares. I recently had the pleasure of watching Cabin in the Woods and loved the display of how inhuman humans can be as a group of friends were steered toward their death.

A few other human monsters that can get somewhat creepy. KIDS. Good grief, kids are so damn creepy sometimes(If you’re reading this and have children, I’m sure they’re fine. Really). A good example is Orphan. Deformed killers covering their faces. I’m looking at you, Texas Chainsaw. Scientists and their clinical, unfeeling approach to what they’re doing, my example American Horror Story(season 2 was terrible, don’t watch it).

2. The second kind of monster I like is the kind you can’t do anything about or against. Stephen King’s The Mist is a good example. How killer was that ending!?! *minor spoiler alert* Yes, we see the military moving in at the end of the movie, but we don’t actually see what they do or what happens to them. I haven’t read the book so if the end isn’t as open as the movie’s, please drop me a comment. Like a good reader/watcher of stories, I like seeing characters struggle against all odds. If they can’t do anything about what’s happening, that’s even better. Add some angst and you’ll spend a heart-pounding hour or two clutching you pillow, unable to look away. Because now you get to watch an entire scary movie where people die but they’re still fighting for survival, something we know they won’t be getting.

3. Anything you find in a Silent Hill movie or game. Seriously. I’m not scared of it, but it’s fascinating to watch, and there are moments where I just can’t help being so engrossed that I jump when somebody’s sudden happens.

When it comes to scary, I like insurmountable odds because it shows us what people are capable of. It shows us character and reactions. The will to live. How can you not love that? This genre is so underrated and swept aside for lacking in certain areas. I say those who criticize scary haven’t looked hard enough at what it really is and what it can give you.

So put your not-creepy-at-all kids to bed and watch something that’ll keep you up for the rest of the night. You can always spend the extra hours plotting a novel or attempting something scary of your own.

Got any questions for the incomparable Jani Grey? Comment at will!

And Happy Halloween!
Posted by Kat Ellis at 08:00 No comments:

In Anticipation of World Fantasy Con 2013

World Fantasy Con is being held in Brighton (UK) this year, and I have wangled myself a membership to attend for a couple of days (I can't go for the whole thing, unfortunately, so will just assume the organisers are aware of this and are saving all the best stuff for when I'm there.) If you're curious, you can check out the WFC programme here.


Sidenote: Because I generally schlub around in sweatpants, I've had to go out and buy real, proper grown-up clothes which make me look like a human and not a slug. To anyone I meet this week at WFC: you're welcome.

I'll write a wrap-up post after WFC about my adventures - until then...

*Runs off to read all the fantasy novels*

Something Good from Sean McConnell

A few months ago, I placed a bid (or 2, or 3...) on an original piece of art by Sean McConnell in the Funds for Feaky auction, which was organised by the wonderful Jessa Russo to raise money to help resident twitter badass Tamara Mataya (a.k.a. Feaky Snucker) after her town was hit by terrible floods.

I absolutely loved Sean's sample drawings, and couldn't miss the opportunity to have Sean draw my book's main character, Skylar, while helping out a pal through the auction.

SO. I bid like a ninja mofo, and managed to secure the drawing. *Steeples fingers evilly* This pleased me greatly.

Sean very kindly agreed to send his drawing over to the UK, and I was so thrilled when it arrived in the mail today. Check out the beautiful drawing of Sky! 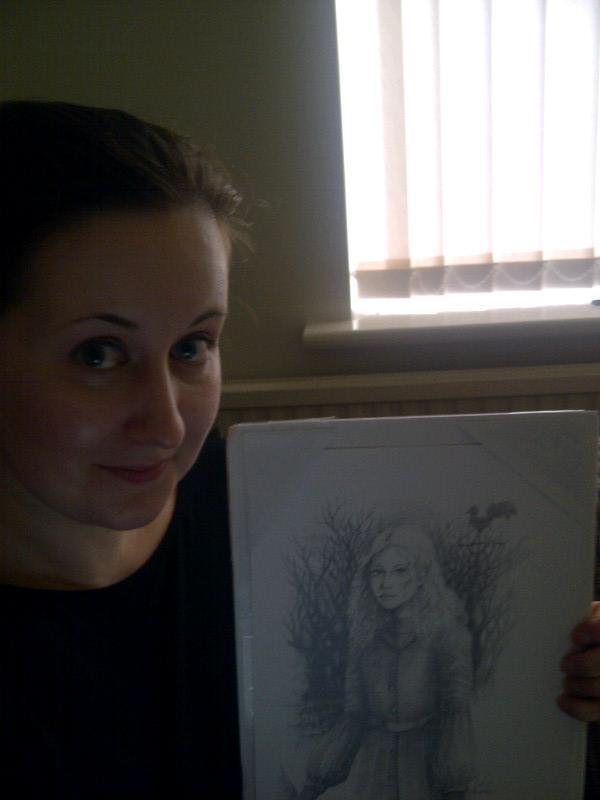