Write On: BLURBS AND QUERIES

Blurbs (back cover copy) and queries can feel like nasty little word-traps for writers. They need to encapsulate the main plot of your story, giving enough detail to make it sound unique, without veering off into a full synopsis. They should also reflect the voice of your novel, and clearly show the premise, conflict and stakes.


"Sell your novel in 250 words or less, making it stand apart from all other novels. Go!"

It can be hard to be objective about something you've written. Not just about the strengths or weaknesses, but about what will sell the story to a reader. Sometimes knowing the intricate twists and turns of the plot can make it feel like condensing the story into a query/blurb is the equivalent of stuffing a 12-headed gorgon into a pencil case. So, writers being clever with word economy and all, it can be really tempting to use broad strokes to cover everything within an acceptable word count.

'When the unthinkable happens...'
'When her life is turned upside down...'
'He is faced with an unexpected crisis...'

Any of the 3 examples above could apply to hundreds of novels, and say very little about the story itself except something happens.

"But I can't go into the whole backstory of Reggie being Ken's long-lost twin who was spotted in a talent contest and adopted by a pop star but then lost everything in a flood and now lives next door to Ken, so I'll just say a blast from the past shows up on Ken's doorstep and that'll cover it..."

Pulling out the vital information is one thing, but being specific enough to make a reader want to find out exactly how Ken's long-lost twin has ended up living next door is the key. Next, you need to set up your conflict: what does Reggie suddenly showing up mean for Ken? What decision will he have to make? And what are the stakes?

The "stakes" are what Ken will stand to lose or compromise if he chooses one option over the other.

When Reggie shows Ken a map marking the location of their grandfather's missing gold, Ken has to decide whether to go with Reggie on a treasure hunt, or stay behind to attend his audition for the Broadway musical of his dreams.


Ridiculous stakes, but clear: Ken either has a chance to find a missing fortune, or a shot at stardom. He can't have both, and there isn't an obvious, easy choice. Because they're not really stakes if the choice is easy.

Ken must choose between trusting his brother, or dying a horrible and agonising death.

And that's kind of it, I think. As a reader, if the choice is hard, and I know the set-up and am genuinely wondering what the MC will decide to do, chances are I'm already making my way over to the checkout to buy the book.

Being a writer in North Wales can sometimes feel a little cut off from the rest of the writing community. Not that there aren't other writers around here - I'm sure there are a few lurking in my neighbourhood. But when compared with the huge (and fabulous) community of writers on twitter, made up of writing tweeps from all around the world, I do feel a bit out on a limb.

But short of moving to London or New York, or starting a writing commune, there are a few ways besides twitter that I can connect with other writers.

It was a huge pleasure to meet YA writer Taryn Albright this week when she stopped over in Wales for a couple of days before continuing on her great European adventure. Taryn is an extremely (scarily) savvy writer and editor who is also represented by agent extraordinaire Molly Ker Hawn at The Bent Agency. I had lots of fun showing Taryn some of the local sights, including a few castles, a walled Roman city, and the UK's smallest house.


I was also lucky to be invited by the wonderful Dee Romito to join a writerly Google hangout a couple of weeks ago, and got to talk to some of the writing tweeps I've been tweeting my craziness at for the last 18 months. Not that we really talked that much during the hangout - as there were 9 or 10 of us in the group, we mostly just played with the google apps and gave ourselves beards and cat ears while laughing at each other. But it was lots of fun, and I was stoked to get to 'meet' such awesome writer friends for the first time.

My next face-to-face writerly event is set to be World Fantasy Con 2013, which is happening in Brighton, England, later this year. I have my ticket, I've almost decided on a hotel, and am looking forward to meeting up with even more writers - especially Marieke Nijkamp, who is probably the most well-traveled writer I've met on twitter, and as sweet as she is ruthless with her critiques!

Have you been to any conferences yet this year? Where else do you meet up with writers?

For this first playlist, I'm offering up tunes for when you're writing a certain type of fight scene: the brawl. This means chaos, fists flying en masse - the whole nine yards.

Got different tunes you write this kind of scene to? Let me know in the comments and I'll add them to the playlist!

This piece of flash fiction is one of mine. Hope you like it!

Footsteps like a heartbeat, too fast for one chest. Too many to be anything but bad news.

I flee, scuttling out from under the debris of the bombs, splinters from a wooden crate snagging at my sleeve. It's a warning: Safer to hide. Always safer to hide.

But my feet have already betrayed me. No choice but to move as the beat bears down on me like a freight train. Splashing ash-clogged puddles against alley walls, too fast for street mutts to do more than gnash their teeth as I pass.

I am a bullet.

A ribbon of seconds flutters in my wake, dissolving in a hungry wind.

Until I’m not. A hand, maybe not, grabs my ankle as I round the corner, and I crumble against the wall. I am a broken bag of bones, too bloody for air to fill my lungs for a moment. A moment too long, I know. The heartbeat is too loud, too close, and they are here. One corner, maybe two corners away.

Fingers like claws rake the dirt around me. My fingers, not giving up like the rest of me. They don’t know.

Scrabbling, digging into dirt. Dust rises in a cloud and I would choke, but my lungs are dust. My body is a bag of bones, my fingers splinters, burying me in the dirt. Maybe they do know.

My eyes don’t close, but darkness does. I am sinking into soil, swallowed, grounded.

Silent, but not quite. The heartbeat is muffled, thundering overhead, an earthquake in another world.

My fingers knew, the splintered part of me.

If you'd like to contribute a Flash Friday post, let me know in the comments or email me at katelliswrites at gmail dot com.
Posted by Kat Ellis at 08:00 8 comments:

Winner of the May "I, Reader" Giveaway

And the winner of a copy of JON FOR SHORT by Malorie Blackman is...

Congratulations, Bridget! Your book will be in the mail to you soon.

Thanks to everyone who entered.
Posted by Kat Ellis at 21:35 2 comments:

I, Reader: JON FOR SHORT by Malorie Blackman

Thanks to Jani Grey for the idea, I'm going to give away a copy of JON FOR SHORT to one commenter (selected at random). **CONTEST IS NOW CLOSED** Leave your comment (with your twitter handle or email addy) by 9pm GMT on Monday, 6 May for your chance to win!

For my first I, Reader post I'm choosing a book which I will freely admit I bought because of the cover, and the story just wormed its way into my head and has taken root there. Here is the back cover blurb:

As the blade flashed down in the dim light, it seemed to wink, wink, wink...

Arms came up to ward off the flashes of light, but it did no good. The flashes got harder and faster.

Jon is in hospital.

The doctors have taken his arms and he is sure his legs are next. Will Jon ever escape? 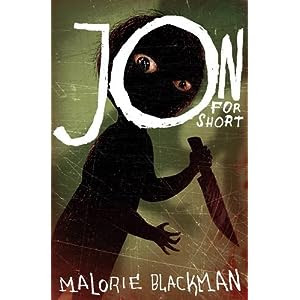 Why did this book stand out?

I've already mentioned the cover, and the illustrations inside are by the same artist - Vladimir Stankovic. I loved the style, and they added a brilliantly murky extra dimension to the story. You can check out more artwork by Vladimir Stankovic here.

The book is only 80 pages long, and JON FOR SHORT was originally published as part of an anthology, but I can see why it was also published as a standalone. It's quick, dark and shocking - a perfect little nightmare of a story. It was also unlike anything else I've ever read, and left me thinking about it for weeks afterwards, so there's that.

It is marketed as being suitable for readers with dyslexia, which caught my attention - I'd never come across this sticker on a book before, and was intrigued to see what was different. I could see certain things which made sense of the sticker as I read - read it, you'll see for yourself what I mean.

I really recommend checking out this book if you like a quick, scary read with fantastic illustrations.

Have you read JON FOR SHORT? What did you think?

Or if you haven't read it yet, will you be checking it out?

Email ThisBlogThis!Share to TwitterShare to FacebookShare to Pinterest
Labels: I Reader

Happy First of May! And it really is a happy one, because I get to help unleash this little beauty on the world... 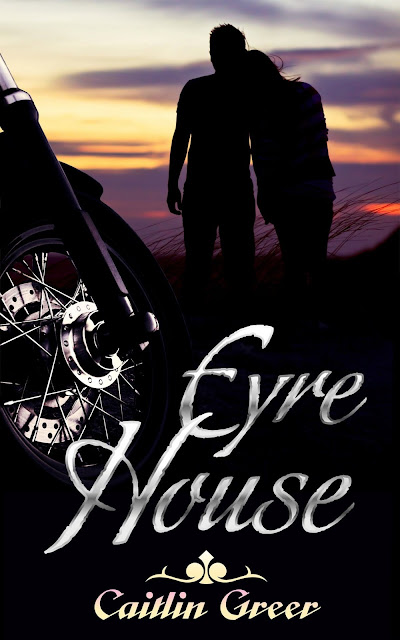 Cait Greer's fantastic NA Southern Gothic EYRE HOUSE will be available to buy in July, but until then, here's the cover blurb to whet your appetite - with a sneaky teaser to boot!

When eighteen-year-old orphan Evan Richardson signed up to work at Eyre House, on the sleepy tourist getaway of Edisto Island, SC, he never expected to find himself dodging ghosts. But Eyre House seems to have more than its fair share of things that go bump in the night, and most of them seem to surround his employer’s daughter.

Back from her freshman year of college, Ginny Eyre is dangerous from word one. She’s a bad girl with ghosts of her own, and trouble seems to follow her everywhere she goes. But living or dead, trouble isn’t just stalking Ginny. When her ex-boyfriend is found murdered in the pool, Evan knows he’s got two choices – figure out what’s going on, or become the next ghost to haunt Ginny Eyre.

You can add EYRE HOUSE to your Goodreads list right now - and you really should, because that Evan is definitely word-candy!

Here's a little teaser, as promised, courtesy of Ms Greer herself:

“Evan.” She closed her eyes for half a second. When they opened, pure golden temptation stared back at me. “Just hush and relax, will you?”

***
WOOHOO! Do leave some cover-love in the comments :) Check Cait out on twitter and her blog, too, to show you have excellent taste.