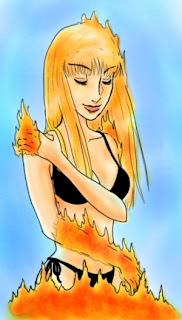 Kat's blog, I am in you! Ahem. A big thank you to Kat, for inviting me to write this guest post. You may be wondering what I'm doing here with this drawing of a bikini clad fire mage. The topic of the day is drawing and writing inspiration, or as I like to call it - art imitating writing imitating art. I think many of you writers out there collect images which you find inspiring while working on any given WIP. Maybe you find images of celebrities who remind you of your main characters or images of buildings or landscapes which inspire your settings. I do those things too, but being both a writer and artist, I also get to explore things from my WIP concepts by drawing my own versions of them. Sexy fire mage here is an MC from one of my trunked WIPs. Drawing her helped me solidify her personality and looks in my head. She's a little flirty, someone who knows how to be calm and enjoy life and she loves her magic. I knew some of that before drawing her, but drawing her cemented it for me. Let's take a look at some other examples.

These two are essentially the same character. Her name was Mira in the top drawing, it had previously been Meranya, and it is now Aria, as pictured in the bottom drawing. I've tried to write her story several different times and in each new incarnation her vibe and appearance change slightly. To capture her new essence in the new version of the story, it helps me to draw her. She is also similar in appearance to a certain flavor of character that I've been drawing for years and years and to some degree she is linked in my head to all those other characters. I think it might be like a right brain - left brain thing. In the writing part of my mind, I think about characters one way and in the drawing part of my mind I think about them a different way and it can help make connections that my writer mind wouldn't make.

Drawing is by its very definition a visual medium and so one element it has always helped me nail down is appearance. Jason, pictured on top, has that tattoo and drawing it really solidified where it was on his body and what it looked like. The drawing also conveyed his vibe - his confidence and the fact that he's into martial arts. Lilian, pictured on the bottom, never had a clear wardrobe in my head until I drew her. She also has a certain air about her which I captured in the drawing and which I could always refresh in my mind while I was writing by looking at the image.

Drawing does have its limitations. I draw in a rather anime/manga sort of style and so I have a tendency to give everyone "anime hair," so I'll supplement my art with photos of real hairstyles if I want an MC to have a haircut I don't like drawing. Also, drawing places isn't my specialty so I'm more likely to have inspirational photographs than drawings of my locations. Despite those limits, drawing has a special way of connecting me with my characters that I don't get any other way. Looking at a drawing of a character can bring so many things about them to mind, just like listening to a song associated with a character can bring to mind important aspects of them and their story. So, it has become an intrinsic part of my writing process.

I also love drawing friends' characters. You can spot my rendition of Kat's character Eden on the Purge and Purge Wall pages of this blog. Btw, Purge is the BEST THING <3 but if you're reading this blog you probably already know that.

Kat here: Thanks, Bridget, for such an awesome post, and for sharing your amazing artwork!

Got questions for Bridget? Ask away! And please check out her blog and follow her on twitter.

Firstly, thanks to Kat for letting me take over this blog for a day. I promise to behave, and leave everything where it was. Probably.

Kat and I are agent buddies – meaning we have the same literary agent, the one-and-only, glow in the dark book maven and all round force for light and good, Molly Ker Hawn. Through Twitter and this blog and then my blog we’re stoutly standing side by side, cracking our way into publishing and to being “proper” authors (whatever that means).

And, crucially, we both write for a younger audience. That’s what I thought I’d talk about today.

Being swept up in the world of Twitter and industry blogs and other author’s sorrows and joys, it’s easy to lose sight of one rather odd fact: normal people don’t do all this. They don’t idolise editors and agents alongside writers. They don’t particularly care about New Adult and dropping advance rates and whether Amazon is going to save us all or is secretly a front for Cthulu. And they don’t use the clever little buzz words and distinctions and jobs-speak that writers pick up after a while – like, I'm fact, New Adult, and advance, or MG or YA, etc, etc.

This has happened to me several times now:

Well Intentioned Friend or Stranger: So you’re writing / So how’s the book / So when is the book being published?

Me: It’s a long process, but I’m getting there. Pass me the gin, will you?

The Well Intentioned: What’s your book?

Me: It’s a children’s book, about [blah, blah, blah]. Seriously, though, the gin…

Young Adult has made the leap, I think, into normal parlance. With Twilight, and certain cross over books like The Hunger Games, YA has become OK. It gets a Section In the Bookstore, and is practically respectable.  If YA were a women she’d wear Mom jeans and eat healthily.

Middle Grade sounds like a year in school and I’ve learned not to use it when describing my work because, entirely justifiable, I’m met with blank faces. Yet … use ‘children’ and people go for the extreme end of the spectrum – the toddlers, the early readers, the future-people.  Is that bad? No. But I don’t write for that age range – it’s a skill I hope to acquire one day – and all that ends up happening is I finally do the normal thing and actually use my words to tell the (by now quite alarmed) other part of this conversation that, actually, I write books for kids around eleven years old. Think the first Harry Potter, before it got all serious, I say (or, before it got all Sirius. Eh? Eh? Hah!) The one with the school song and the jokes about ear wax. Think that.
So here’s my point, if I have one: it’s good sometimes to wake up and shake off the industry talk and the phrases and acronyms. Forget whether contemp. NA steampunk mss. are popular with the Big Six / Five / Whatever. Authors need to be able to talk about their work in a normal, down to earth way, just as much as we need to be professional. So, if M[idle] G[rade] hasn’t made it to your town’s vernacular yet, work out the best way to talk about your book from the heart, so people get it. 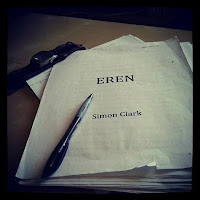 I know I sometimes get swept up myself hobnobbing, albeit virtually, with agents and editors and even incredibly famous writers. But why is it I want all that? Because of stories, and their power, and because I want kids around the world to read the ones I wrote down. Any walls between readers and writers that I have the power to bring down myself, I will.

So I’m a children’s writer, or a MG author, or just a story-teller.

And what a beautiful thing that is.

Kat here: Thanks, Simon, for taking over my blog today with your awesome post!

Don't forget to follow Simon on twitter and check out his blog. And leave your comments or questions for Simon below - commenting is for winners, my friends.
Posted by Kat Ellis at 14:00 3 comments:

This is totally how I'm feeling right now.

After finishing my chunky edits, I've spent this week working through what I call smooth edits - those tweaky, niggly little edits which demand fresh eyes I don't have after reading and slashing and splicing my poor MS a bajillion times. This is what smooth edits look like for me:

Going through the tiny notebook - this means smoothing out all those little plot/world-building gripes I spotted during the chunkies, making sure everything ties together and makes some kind of logical sense.

Character studies - I do mini-character studies for each of my important/main characters. I do this now rather than while working on the first draft because I know them better now, know what motivates them and how they're likely to behave. This exercise helps to flesh them out further, to pick out the points where I've coerced them into acting in a way which is out of character. Then I fix them (or try).

Line edits - I generally do two rounds. The first I do on-screen before I send out to betas. The second I will do after I've had their feedback and made any changes, and this one will involve a full print-out with coloured highlighters and sticky notes. I know, I am the scourge of treekind. But I do recycle.

CPs and the beta rounds - I'll be sending out my MS to 2 rounds of betas (this will be 5 or 6 CPs). Having two separate reads helps me to see if I've fixed any problems the first round of readers picked up on, and still have fresh eyes to spot further issues. I also don't like to ask my CPs to beta the same MS for me twice unless I really have to - I don't want them to get bored reading my stuff!

So this is where I am right now - about to send my MS out to my CPs. Hopefully they'll like it!

Do you go through 'smooth edits'? Do they differ from mine? Please share!

In my last post, I talked about finishing the first draft of my latest MS and what a hideous mess that looked like. Since then, I've been getting down to what I affectionately term 'chunky edits'.

Because my poor first draft was full of plot holes and huge gaps in continuity, my first editing pass is really focused on two things:

While I'm editing, I'm also reading a book on writing craft called The Breakout Novelist. It's a great read, and very easy to get into (important for me, as I hate reading 'craft' books generally) - I'd really recommend it if you're at any other point in your process except querying. If you're querying, your MS is done and dusted, so reading this book then is probably only going to make you doubt yourself.

I think I'll probably take another week to finish this editing pass, then I'll move on to 'smooth edits'. Yes, I am aware that my editing phases sound like they are named after types of peanut butter. But more about that in the next post!

What's your editing process? Do you work in phases, like me, or have another method? Sharing is full of WIN.